JAMESTOWN – A peaceful protest on the SUNY JCC campus by members of the LGBTQIA+ of former State Senator Cathy Young’s commencement speech Friday evening proved to be emotional for the group as the event continued.

Micki Gillian, a SUNY JCC student who identifies as pansexual, was the first student to speak during the demonstration. Gillian explains that the decision by President Daniel DeMarte to keep Young as a speaker provided an emotional blow to herself and others.

“It really broke my heart when I saw the email that they (administration) were going to let her speak today as a speaker of JCC,” Gillian said. “For me, as a pansexual and seeing that a woman that is against LGBTQ+ rights, it was not right for me to see her speak for a college that supports Pride Club.” 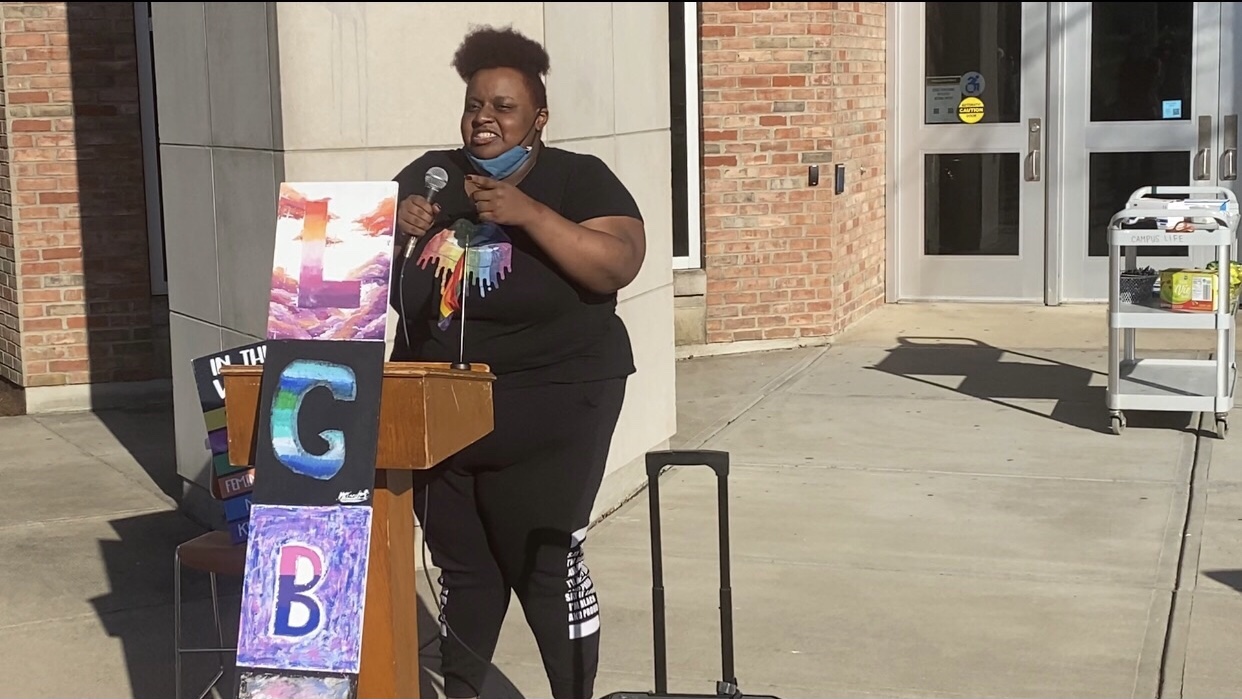 Gillian explains that as a (confused) 15-year-old, she came out to her family. She says her aunt kicked her out of their house, and she was homeless for awhile before finding a supportive family. She says, although she is no longer part of Pride Club due to educational obligations, she still remains supportive of the Club’s cause.

“I heard that she (Young) voted against transgender rights,” Gillian furthered with emotion. “I said, ‘No, we should not have her as a speaker because that is wrong for any student that is gay, transgender, (sic) to see a woman that is against our sexuality. “I’m not going to let someone stand at a college and show a bad example saying, ‘Oh, I don’t like that your gay. Congratulations, you got your diploma.'”

Greg Rabb, an openly gay professor at SUNY JCC, was one of the leaders of the protest. Rabb says “this fight is not over,” adding that he’ll fight as long as he can. Rabb says that the decision by the college to keep Young on as a speaker has made him and other members of the college feel alienated.

“I said, ’35 years and I don’t count,'” Rabb recalled saying when he learned that Young would be speaking. “That’s the way I felt.”

The former City Council President says that, as of now, he has one full-time year remaining at the college. He adds that he feels “he doesn’t want to be here anymore,”

“I don’t love JCC anymore,” Rabb said. “Not my colleagues, not the staff. There’s so many wonderful people here who go out of their way every single day to perform miracles with our students. I’m so proud of that and be associated with that. But I feel completely and totally abandoned and invisiible to the president, to the administration and the board.”

In a statement DeMarte sent to WNY News Now Thursday, he said that he is eager to have the college learn more about the mission of the LGBTQIA+ community.

“The conversations we are having are important in helping us learn and grow together, and they confirm the importance of our work in making DEI a priority for this college community,” said DeMarte in a statement. “We look forward to honoring each and every graduate that has persevered through a period not seen in our lifetime.”