“The revenue news for New York was positive for the first quarter,” DiNapoli said. “However, economic headwinds are increasing, and may alter the trajectory for the remainder of the fiscal year. Bolstering rainy day reserve funds on or ahead of the schedule included in the Enacted Budget Financial Plan should be a priority.” 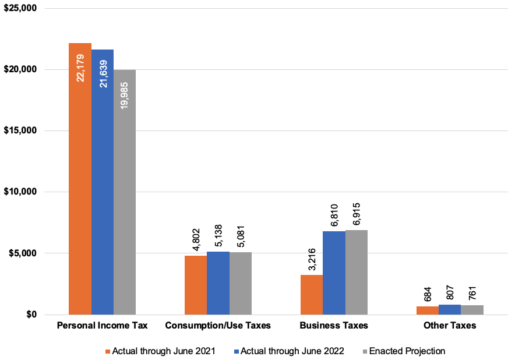 However, PIT receipts were $540.5 million lower than the same period in SFY 2021-22, reflecting, in part, the effects of the Pass-Through Entity Tax (PTET), which allows certain taxpayers to make business tax payments rather than personal income tax payments.

Business taxes totaled $6.8 billion, over double those through June in the prior fiscal year, but $80 million below financial plan projections. The large year-over-year increase is primarily the result of $2.8 billion in collections from the PTET in the month of June.

All Funds spending through June totaled $49.5 billion, which was $3.1 billion, or 6.7%, higher than last year for the same period.

All Funds spending through June was $4 billion lower than financial plan projections, primarily due to lower than anticipated spending for local assistance payments.